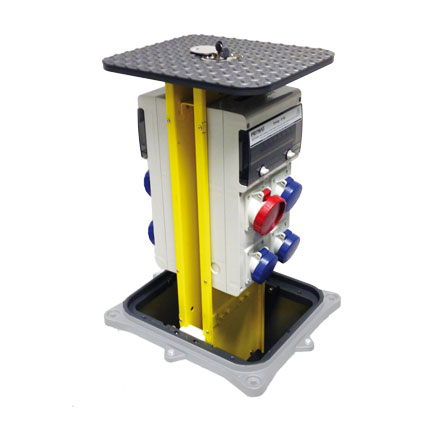 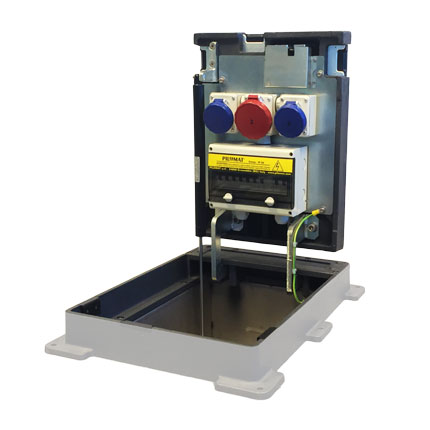 The semiautomatic PILOMAT ENERGY towers series are designed to provide complementary services such as electricity and telephone communications, compressed air and water. They are used in those places typically used for parking or pedestrian areas, and sometimes used as market areas and places for events, concerts and similar. The use of PILOMAT ENERGY prevents the laying of cables and tubes, guaranteeing greater security for its users. The current models are the result of the development of more than 20 years of experience.

The PILOMAT ENERGY B4040 55 towers, at semiautomatic movement, allow for multiple installations of single–phase and/or three–phase 16A, 32A, and 63A, in accordance with EN 60301–1 EN 60301–2 regulations and related protective circuit breakers. The coverplate at the top of the movement tower is in compliance with UNI EN 124 regulations with load class C250 or D400.

The pilomat energy LONDON towers, at semiautomatic movement, allow for multiple installations of single–phase and/or three–phase 16A and 32A in accordance with EN 60301–1 EN 60301–2 regulations and related protective circuit breakers. The driveway coverplate at the top of the moving tower is compliant with UNI EN 124 regulations with load class D400.

Action: the pilomat energy LONDON structures, semi–automatic movement, are operated using a mechanical key that unlocks the restraint, resulting in automatic 90º opening from the coverplate due to the incorporated gas actuator. The closure of the structure is carried out by pushing it toward the ground, acting with the foot on the coverplate with the 90º opening from the ground; a cover totally below the restraint system is automatically locked, preventing the possibility of lifting.